Hana Oboro ~Sengonku-den Ranki~ (花朧 〜戦国伝乱奇〜) was recently announced by Otomate and is slated for a 2016 release!! The director is Kizaki Hana, while the main scenario writers are Wakamiya Tasuku, Natsuno Kei, and Yoshimura Ririka. Art is by Ashika Nozomu.

The late 1500s.
An innocent princess, who yearns for love, runs down the streets of her castle town.

Younger sister of Oda Nobunaga, ruler of the Owari Province, the name of this princess is Ichi. However, despite the kindness that Ichi shows to everyone with no prejudice, there is a name that the townspeople have given the Oda family in secret ——

All the descendants of the Oda family are born with captivating black hair and blue eyes, and the townspeople fear this almost inhuman beauty that the family share.

However, there is a secret about this town that even the leader of this ‘bewitched’ family, Nobunaga, does not know — that the Sachimitama (幸魂 lit. Bead of Luck), a family heirloom passed down to him from his mother at a young age, has been lost.

Furthermore, hidden is the existence of the Oboro (朧): two mystical foxes that speak the language of humans, Kuro and Gyoku.

Even so, this is a time of anarchy.
Ichi becomes inevitably caught up in the battles that occur as those from all over Japan attempt to unify the country with their own two hands —— 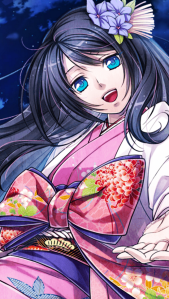 The princess of light who will change the future
Ichi (市)
cv. n/a

‘No matter how tough the future is, I believe that we’ll be able to change it.’

The princess of the Oda family and the younger sister of Oda Nobunaga. She is cheerful and lively, and can often be seen running down the streets of her town. Her beauty is known of even outside the Owari Province.

Friends with the Oboro, Kuro and Gyoku. She is not very happy with the idea that she may be married off for political reasons. 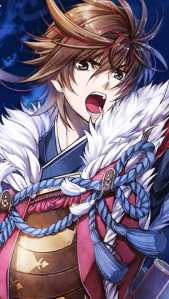 ‘There is someone I must protect at all cost, Brother, even if it means I will have to betray you.’

A young man who grew up with his mother in Oumi Province as hostages. One of his biggest worries is that his face easily turns red. (lmao do you not have better things to worry about)

While he is kind young man who is honest and always thinks of his mother, he holds a grudge against his father, Hisamasa, who forced his mother to live imprisoned when she was pregnant with him, and is trying to take control the north of Oumi Province and rule in his own way. 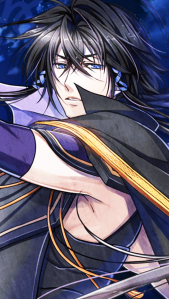 ‘You are precious to me. But surely this, too, is simply an illusion.’

Eldest son of the Oda family and its current leader. Possessing beautiful black hair and bewitching looks, he loves his younger sister, Ichi, more than anything else. (wow didn’t see this coming!!!!!)

He has absolute confidence in his own strength, and will cruelly cut anyone down, regardless of who they are.

‘Regardless of whether we meet each other as friend or foe, I will never forget that smile of yours.’

Ruler of the Kai Province and Takeda family. Due to an incident in his childhood in which he was abandoned by his father, he became uncomfortable with speaking to others.

His calm personality has earned him respect from his vassals, who often go to him for advice.

He who is his own reason and justice
Shibata Katsuie (柴田 勝家)
cv. Sakurai Takahiro (omg i laughed so hard at his growly voice in the teaser)

‘Master and servant? I’ve got absolutely no interest in a relationship like that!’

A vassal who has long served the Oda family. He previously served Nobuanga’s younger brother, Nobuyuki.

He has a very rough personality, and speaks casually even to his master, Nobunaga. Though he loves to indulge in women and alcohol, his abilities as a swordsman are top within the Oda family. When Ichi was a child, he often played with her.

A young man working for Saitou Tatsuoki. A prodigious strategist who once served Tatsuoki’s grandfather, Dousan.

He prefers to be on his own, and because he treats everyone with the same cold attitude, he does not get along with his peers. However, it seems that he treats Dousan only with a different attitude. 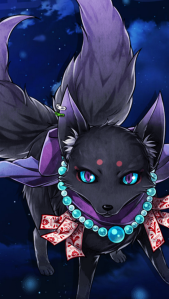 ‘You really are loud for a princess.’

A two-tailed fox which flies on Ichi’s left side.
Has a serious personality and cares for Ichi.

‘This abura-age is so good~♪’ (lmao same)

A nine-tailed fox which flies on Ichi’s right side.
Has a laid-back personality, and enjoys joking around and having fun.

aaaaaa this is another one of those games where I’m just not really sure???? the site only opened like yesterday so I guess I can’t really say much ww — but is it just me or does the entire ‘story’ just sound really detached from the heroine( ´ ▽ ` ；) like what was I even supposed to learn other than the fact that the oda family is rly hot lol

oh but I kind of like how ‘shounen anime’-esque the art style is!! wwww (just look at the main guy’s hair if you don’t understand he’s borderline card game anime hair imo😂😂) at the moment I’m probably the most interested in the strategist guy no clue why that’s the case hahahhah……. but all the characters seem pretty interesting!!!! heroine sounds sorta typical but I think she’s cuteｖ（＾＿＾ｖ）♪

mmm I’d be happy if this turned out to be something similar to juuza engi!!!! then again the heroine’s a princess so it won’t be like juuza where kan u’s witnessing huge battles first-hand and slaying people left and right by herself😂😂😂😂

will update as more info is released~ why am I even writing blog posts my finals start tmr aaaAAAAAAA;;;;;;